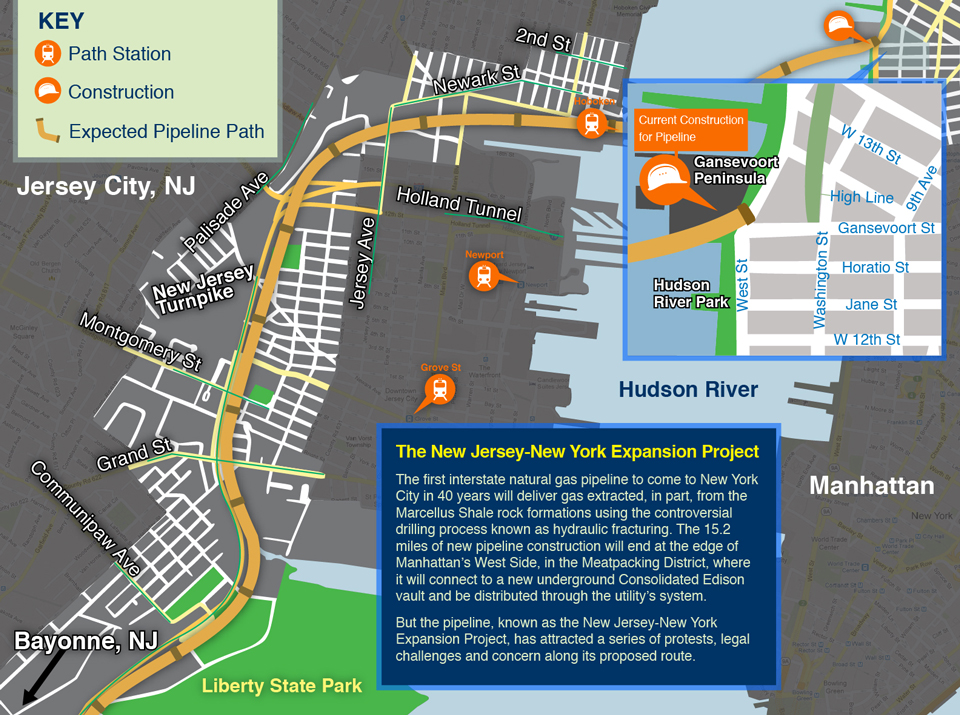 Hudson River Park Trust Sued Over Pipeline Posted on September 9, 2012 As reported in The Daily News, Sane Energy Project was joined by 5 enviro and community groups in seeking an emergency restraining order to halt construction of the Spectra pipeline. Petitioners include Food and Water Watch, NYC Friends of Clearwater, NYH20, Village Independent Democrats, United for Action, and several residents of the West Village. The suit maintains that the HRPT violated the terms of its charter and several environmental regulations by granting an easement to Spectra Energy for the Gansevoort Peninsula. Construction on the peninsula continues as petitioners await a ruling on the case, due on Sept 18th. Petitioners are represented by Jeff Zimmerman, a noted environmental rights lawyer and one of the few who have won a case against FERC; Richard Lippes, an environmental lawyer who frequently represents the Sierra Club; and Yetta Kurland, renown civil rights lawyer, activist, and West Village resident. Frieda Bradlow, a member of Village Independent Democrats’ committee, on behalf of her organization said, “From our first information concerning the pipeline we considered it an environmental and safety disaster for our park and our neighborhood.” Ynestra King, a plaintiff and member of Sane Energy Project, said, “Having the [Hudson River Park] nearby has enlarged my world, losing it, even temporarily, would be a real tragedy.” Ms. King is disabled, and counts on the pedestrian path running parallel to the Hudson River Park for a safe and reliable alternative to riding her wheelchair on the congested and comparatively much-less safer streets of New York City. This week, since the construction has closed off the better part of the pedestrian pathway, Ms. King has been forced to travel in the bike path, along with bikers and walkers. Owen Crowley, a board member of organizational plaintiff, United for Action, stated, “We represent people who are concerned about the environment and the sustainability of their future. Our members who live around Gansevoort are exposed to a risk of explosion as well as, along with the rest of the City, the harmful effects of radon exposure.” Clare Donohue, a founding member of plaintiff Sane Energy Project, an organization that has been adamant in its opposition to the pipeline stated that her organization “was pursuing this litigation on behalf of the nearly 5000 people who filed public comments in opposition to the project.” She pointed out that only 22 people filed public comments in favor of the pipeline, all but one of whom stand to benefit financially from the project. As for Food and Water Watch, Scott Edwards, the group’s Co-director of Food and Water Justice, said, “Fracking is only allowed to exist because the industry has bought exemptions to virtually any federal public health and safety law that has the words ‘safe,’ ‘clean,’ ‘conservation’ or ‘environmental’ in it. Food and Water Watch is challenging this pipeline in court because our government is failing to protect our communities from the inherently harmful impacts of this irresponsible industry practice.” Donna Stein of NYC Friends of Clearwater believes that, “Spectra Pipeline represents the worst of corporate negligence towards the rights of citizens. The citizenry has not been informed of the major risks associated with such a pipeline – no valid environmental impact study has been performed and the citizenry has not been informed of the major risks of fracking to our drinking water, our land, our air.” Joe Levine, director of NYH20, on behalf of his organization stated, “We believe that bringing radon into New York City is a public health hazard and should be stopped immediately.”